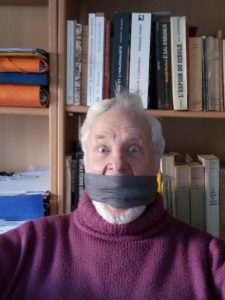 Researchers, historians and other muzzled whistleblowers.

How to explain such a stranglehold on information?

Nowadays, we no longer burn forbidden books, yet curiously in our hyper-informed society, nothing is easier than making information disappear, simply by hiding it in the media.
To be convinced of this, it is enough to read the testimonies of the most recognized academics such as Antony C. Sutton, British economist and historian, researcher at Stanford and professor at UCLA who was one of the first, in the 1960s, to reveal the part played by American bankers and industrialists in Hitler’s accession to power and the war effort of the Third Reich, or Alice Teichova, professor at the University of East Anglia at Girton College in Cambridge and at the School of Economics and Political Science of London, who traced the British and European ramifications of the Nazi financial system in Europe, or Adam Tooze, a teacher at Yale, who revealed the truth about the German economy in the interwar period, Edwin Black who exposed IBM’s predominant role in the conduct of the war and the Holocaust, or Joseph Borkin who dared to attack the crimes of IG Farben, that is to say the Standard Oil company of J.D. Rockefeller Junior. All of them, like many of their “revisionist” university colleagues, had to undergo constant and varied pressures, as Sutton testifies:

“Despite their Constitution and its supposed constraints, the United States has become a quasi-totalitarian state. If the external signs of the dictatorship are not yet visible and the concentration camps and other agents of power knocking on our door at midnight are not our daily life, the critics of the establishment are nevertheless the object of threat. Actions are taken against them, such as the use of tax services to bring dissidents into line, or the manipulation of the Constitution by a judicial system subordinate to this elite. (-) Through publishing houses controlled by this same financial elite, embarrassing books go by the wayside and “useful” books are put forward. (-) The overall result of this manipulation of society by the Establishment has been the outbreak of four major wars in 60 years, a crushing national debt, the abandonment of the constitution, the suppression of freedom and opportunity , and the creation of a huge chasm of credibility between the man in the street and his political leaders.

The transparent device of two main parties trumpeting artificial differences, conventions worthy of circus games, and the cliché of more partisan foreign policy, is no longer credible at all. And the financial elite, which itself recognizes that its policy does not win the support of the public, is obviously ready to go its own way, without the symbolic support of this public. The proofs brought by the revisionist historians constitute the stop of this debate, the bases of our accusations of subversion. Slowly, over decades, book after book, virtually line after line, the truth of recent history emerges as documents are published, examined, analyzed, and organized into a more valid historical framework. (Antony Sutton – Wall Street and the Rise of Hitler).

This text dates from 1976. However, forty years later the situation has not changed an inch, on the contrary getting worse. Thus, in 2013, in Canada this time, the historian Jacques Pauwels, of the University of Toronto, complained about the same obstacles silently opposed to the freedom of information by these few lines in conclusion of his book: “The history , that’s rubbish,” Henry Ford once said. Big Business has the money to get the books written and distributed widely. This work is put together by hand-picked authors whose companies can expect sympathy and understanding, and these authors know what is expected of them in return for lavish fees. In these books, therefore, there is usually no mention at all of potentially unpleasant themes. We can qualify these works as “antiseptics”. In the more or less official histories of large American companies, for example, there is almost never any mention of the role of their subsidiaries in Germany during the war. (-) Antiseptic studies have been produced on behalf of Ford, General Motors, Volkswagen, Krupp, Allianz, Daimler-Benz, Deutsche Bank, Degussa, Dresdner Bank, Flick and Bertelsmann. It is no coincidence that such authors have no difficulty in quickly finding a major publishing house willing to publish their work.

The overwhelming majority of large American and German publishing houses are either gigantic corporations and therefore bona fide members of Big Business, or owned by holding companies whose large corporations own large portfolios of shares. Manuscripts of critical studies are almost always refused by these publishers. Books in which delicate subjects are avoided, or skilfully justified, can on the other hand be found for weeks on end in the windows of large bookstores which, very often, are subsidiaries or associates of large publishing houses. Critical studies are generally difficult, if not impossible, to find in these bookstores. And this phenomenon is beginning to spread in Europe. Large publishing houses linked to big business, which publishes non-critical studies with large circulation, can afford this service. (Jacques Pauwels Big business with Hitler).

Which makes it possible to forget the recommendations of the most eminent representatives of this respectable profession:

“The writing of history consists of an endless revision of the past. The actual reality of history demands to be considered along with its possibilities” John Lukacs

“Any truth is good for the historian to say, even and especially that which upsets prejudices, clashes with received ideas or partisan interests.” Raymond Aron

And those of some reasonable men:

“Wherever chance seems to operate on the surface, it is always under the sway of hidden internal laws, and it is only a question of discovering them.” Friedrich Engels

For the real plot of the media and publishers under the orders of Big Black Capital was not to forbid revisionist historians and intellectuals to work, but to appear to be disinterested in their work, to relegate them to the dustbins of information and , at best, to only mention them in “elitist” television programs, or in documentaries broadcast at the most advanced hours of the night.

Because everyone has always known that:

and that the “Lower People” must be kept in ignorance.